Well we have been interviewed, talked to, talked about, published in print and even been on the radio.....

Bluescreen at 21 - Bristol 24/7 Interview April 2022
We did an interview with Bristol 24/7 re our upcoming 21st Bday and the past 21 years of bluescreen! Have a read here:
www.bristol247.com/culture/film/bluescreen-at-21-one-film-was-just-a-bunch-of-overweight-men-in-bondage-gear-eating-multicoloured-chicken-wings/?fbclid=IwAR2PyCB4uXcaBL3iLvWg-x6hZtJpa-Vvf0Dawr8mi0cwTdJxSLcuAigm7us

Epigram review of Nov 2018's Bluescreen
Bluescreen had a visit from Bristol Universities Independent Student Newspaper, Epigram at last Novembers Bluescreen and here's what they discovered about Bluescreen...
epigram.org.uk/2019/02/09/bluescreen-short-film-bristol/
Big thanks to James @ Epigram for the kind words. 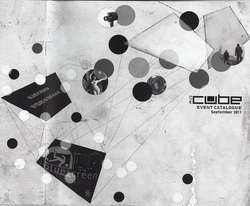 Inside, with a piece on Bluescreens past!
Sept 2011 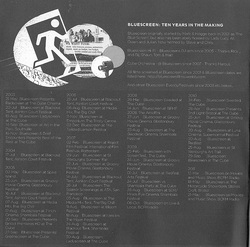 Bluescreen in The Guardian! 07/08/11
Check this out; The Cube Cinema was in the Guardians top 10 of best Cinema experiences in Britain! And Bluescreen was also mentioned in the writeup on The Cube! Read in full here: http://www.guardian.co.uk/travel/2011/aug/05/ten-best-cinema-experiences-britain

Bluescreen on BCFM 210511 by Bluescreenfilms

Bluescreen on the Radio!  12/03/11
On BCfm Movies and Music Show, we talked about 10 years of Bluescreen. Heres the link to the show:  (About 18m & 39mins approx into prog). Thanks again to Mark for inviting us on)

Bluescreen on BCFM 120311 by Bluescreenfilms 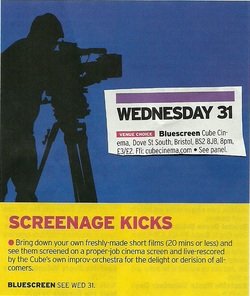 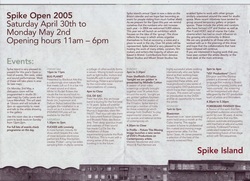